Today I went to Manhattan. The city is always moving and it is always wonderful to walk around and find so much culture, so much movement, so much color and so much diversity. It doesn't bother me; maybe because I don;t go over there so often.
This time I think that I have the right and obligation to post this blog and pour down my impressions about this particular day.
I had to take my niece and her baby to the city, because she wanted to visit the Metropolitan Museum of Art.  The weather could not have been better, the baby was unusually pleasant (one year olds cry and get upset easily), and the Long Island Railroad trip ran very smoothly, and on time. We had a quick lunch in one of those "delis" that offer all kinds of stuff...sandwiches, salads, wraps, and pastries. Since their opening, it's getting easier to have a nice, inexpensive stroll through Manhattan, because you don't have to spend a fortune to please your visitors ( I have to tell you that I am somewhat thrifty).
After looking at some art work offered by the street vendors which stand in front of the museum, we carried the stroller up the stairs....so colorful! People are seating on the stairs...some eating, others having intelectual discussions, others taking pictures.  After checking the Egyptian, Chinese, Indian and Japanese art exhibits, getting some souvenirs, and after looking at the wonderful Picasso collection, which made me change my mind about cubism and "modern art", we had to leave, because it was closing time.
Because the baby had been so well behaved today, we decided to take him to one of the playgrounds in Central Park, and that is were our Via Crucis started!!!  He couldn't get enough of the swings and the slides and kids playing around...Two chinese babies looked so cute buckled to the baby swings!  And their moms seemed to be enjoying more than them the slight impulse while they pushed them...
We got a case of ""delirium tremens", but were able to drag him from there.
We decided to get into the bus, to do some real sightseeing as we headed to Penn Station to take the train back home. The stroller was packed with baby needs, some souvenirs and my pocketbook. The lady driver let us in and warned us about keeping the carriage as far away from the aisle as posible.  A big lady frowned her face and started mumbling about her tax money and about the millions that the city spends for a safe environment, and here we are, violating codes and endangering people (maybe she thought we were illegal aliens).  As the bus reached 34th Street and 5th Avenue, we were already exhausted and the baby, sleeping.  We started our way down very carefully, but my inexperienced niece, after asking for help (which was never offered or given to her), lost control of the stroller and the baby fell on his face with her by the side. I got so frightened and couldn't stop thinking about the face of satisfaction of the big lady inside the bus...who now was going to make her point clear!!! Fortunately, nothing more happened, and things did not go further than a big scare for the bus rider, ourselves and the remorseful indifferent "help deniers".  I was thinking about all the ifs of the world and how lucky we were. The little boy was so surprised, that he only cried for a block or so, until we reached the final bus to Penn Station.  We arrived just on time for the 7.08pm train to Long Island.  My feet were pounding and I was extremely tired after all this stair climbing and descending with the heavy carriage. Mommy was carrying her baby this time.
Finally we were in the train.  Baby got impatient and went under the seat. He started shrieking as the train started rolling..you could hear an indistinct "sshhh"from everywhere. He got his security blanket and held to his mom, and that was the end of them for a while.  So I decided to talk to my friend on the phone. Not two minutes had gone by, when the guy who collects the tickets came by and told me at "point blank"" that I had to stop talking on the phone, because everybody was complaining about how loud I was speaking.  Bullshit!!! Everybody was talking with their families on the phone, and everybody was talking to their friends!  And my voice was lower than theirs. I never felt so violated of my rights. and so I informed the guy.
These incidents: the mean commentary of the big lady in the bus, and this last happening lead  me to think two things: either we live in a very neurotic, intolerant, indifferent society, or we are facing a serious case of disgusting racism, because I was talking in Spanish.  Or could it be, that people tend to eavesdrop and hear each other's conversations, and I guess I was not letting them entertain themselves, because they couldn't understand me?  I think that our society has not changed...that they like to justify and blame their frustrations in minorities, but they don't realize that all of them have been foreigners at some point in their lives; they don't realize that by making these differences, by desintegrating our society, they are caving their way in a hole of deception, hate, and disunion...where they will perish and never surge again!!!  Stop!!!
Publicadas por Lucy Newton a la/s 04:49 No hay comentarios.:

Etiquetas: Opinion through a story: Manhattan

Quinoa...Quinua is the original name. 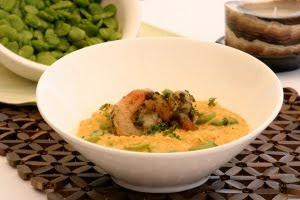 Quinua o Kinwa (a quechua word) is a food plant which belongs to the species Chenopodium Quinoa.  Its origin is traced to the peruvian highlands in the vicinity of Lake Titicaca, from where it spread all over South America.  It grows at altitudes of 12,000 feet over the sea level and tolerates cold weather very well .
Archeological findings lead us to assert that this plant was used as a food source by civilizations which flourished as far as 5000 years ago.  The chroniclers talk about this product and its uses by the indians, since they arrived to America.  Garcilazo de la Vega, our mestizo chronicler and son of a spanish captain and an Inca princess, tells us that quinua occupied the second place among the Andean grains in the diet of the Incas and it was widely cultivated in their territory.
Its flower is formed by pearly clusters which resemble rice and which is the main source of its food.  They also ate the leaves in their stews, since they considered it very tasty. They also made beverages with the grain.
Quinua is an excelent source of proteins, aminoacids, Vitamins C and E  phosphorus, potassium, magnesium  and calcium.  It has no cholesterol and is gluten free and non allergic.
Quinua has great antinflamatory and healing properties and can be used as a great desinfectant of the urinal tract. For those people that are allergic to milk , this product is an excelent substitute as a calcium source. Since it is a leafy grain and doesn't belong to the grass family, it can be tolerated by people who are allergic to grains like wheat ot barley.
Quinua is used to prepare casseroles, soups, breads and beverages, and there are many recipes for its preparation.
The saponin or soapy layer which covers the grains, was used by the Incas to wash their clothes; that is why it is recommended to wash the grains three or four times before cooking them, to take away the bitter taste.
The quinua or so called "golden grain of the incas", continues conquering the international markets, due to its great nutritional value. There has been a steady rise of exports and according to ADEX, there has been a growth of 78% in exports, from January to October of last year; considerably higher than in previous years. United States concentrates 45% of imports of this product. Israel, Germany and Ecuador are also strong importers.  In 2009, Peru was exporting this product to 29 countries.
Having all this said, I thought it would be of wonderful taste, to provide my readers with an excellent recipe for Quinua.  Now, with all these fusion tendencies, Lima chefs in Perú are substituting the original recipes for others which integrate products which are original from this country. And so comes the Quinoto...a substitute of Rissotto, the originally Italian dish.

Quinoto
2 cups of well rinsed quinua (wash it until de liquid comes out clear)
1 cup of mushrooms (canned or fresh)
olive oil
Sazon Goya with zaffron
Annato powder
Salt and Pepper
1 big onion
1 tablespoon of garlic
I pound of cooked shrimp and reserve the water where it boiled
1 can of mushroom condensed soup
1 can of evaporated milk
1/2 cup of white wine
1/2 cup of parmesan cheese.

After rinsing the quinua three of four times, until de water comes out clear, boil the quinua for 7 to 9 minutes until it is cooked "al dente". Reserve.
Cook powdered annato in 1/3 cup olive oil and fry in this pan the onion and garlic, until clear, but not toasted.  Add and slightly fry the shrimp and mushrooms.
Add the quinua and mix well.
Add one cup of the shrimp water, one can of evaporated milk, the wine, and the mushroom soup. Add salt and pepper to taste. Add the parmesan cheese.
Mix carefully with a wooden spoon and when it gets the consistency of a loose puree, turn off the heat.  If it's to dense, just add more shrimp water.   Make sure that you don't overcook the shrimp.  You can add chicken or a seafood mixture, instead of the shrimp.  Serve inmediately!!!
Publicadas por Lucy Newton a la/s 05:34 No hay comentarios.: