The Bear - Film by Jean-Jacques Annaud

This is so amazing, that I had to share it.

Click on the blue print to go to the link:

Birth of an Elephant

This is a dramatic and beautiful video of the birth of an elephant. Maternity exposed at its most rudimentary, but still wonderful exposure of the miracle of the birth of a living creature!!
Please copy and paste link to see video.
http://www.pelapapas.com.mx/htmls/nacimiento-elefante.html
Publicadas por Lucy Newton a la/s 04:00 No hay comentarios.:

Etiquetas: Animals: Birth of an Elephant

The Lost Pyramids Of Caral

A weekend full of emotions

This weekend, without exagerating, has been one of the best weekends of my life. So many emotions, so much pride, so many remembrances, so much kindness from my friends....so much everything!!!! Now my body is tired, but my spirit is renewed!!!!! 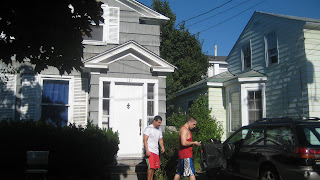 Well...I had to help my youngest son move into his "new rented home", so we traveled upstate NY.  The first night I stayed at my schoolmate friend Kuki's house; and as always, we had a nice and long conversation while we ate a late night snack composed of ice cream and chocolate chip cookies made by her incredible husband Gary.
After a well deserved sleep and a hearty breakfast, I drove to Oswego, one hour and a half away, to start with my assigned chores. I have noticed that since I am a Cross-fit member ( a scalable fitness program, designed for military operations units, martial artists, professional athletes and grandma's like me) since a year and a half ago, I have improved my strenght and capacity to lift heavy weights; and of course this was very useful for this oportunity.  The old airy and bright house(hope it doesn't accomodate ghosts, like the last one they lived in...after all, all crooked and antique houses welcome them) was ready to welcome the arrival of its newcomers.  The kids worked hard bringing up and down their furniture and stuff and here I was, one of them, feeling that this was my last opportunity to share some of the college life, because in one more semester, Eric will be done with school. I've always said that kids give you the opportunity to relive your youth!!!  We went to the store and bought some "last moment"  items we needed to make their stay more comfortable.  We also bought some groceries for his "all night munching" and lots and lots of juices to quench his thirst on those tiring study nights.  Eric flipped some coins and got the smalllest room of them all (3), but we still have to acknowledge that it has a good size. We decorated his room the best we could, because we noticed that part of it was slanted and if we placed his dresser on that side, the drawers were always going to be open.  The bed got that spot, and missed the slant for a bit. 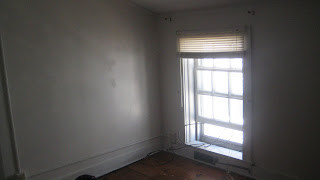 The "chest of drawers" (they laughed at me when I called the dresser that. But later, a company's advertisement add gave me the reason!),found its place in front of the bed over the straighter part of the room, and his desk on the right side of the room, under a very convenient wall light (the only one that illuminates the room). Although this particular house has great potential for any buyer, I have to make a comment about the fact that landlords and landladies, have found a wonderful way of making easy money renting this dilapidated dwellings to college kids at exhorbitant prices (6 thousand dollars for a "4 month semester", for example).  The demand is so big, that they cannot complain even if they don't give them back their deposits; because for example, they take advantage of a position as the sheriff's wife or of the naiveness of the kids...They paint (or give them as is) their rooms as we would say in spanish: "Here passes Pontius Pilate making some scribbles"; which means that they better had not painted it!  It seems that rural towns make their own laws...
We: Eric, Chudley( Eric's friend whom I promise to later register in the Cross fit classes, because he demonstrated to have the force of a lion) and I, had a hearty lunch in the terrace of the Subway restaurant  overlooking the Oswego ( indian name meaning "mouth of the stream")River (river that flows into Lake Ontario)  and the innumerable boats that circulate along it. 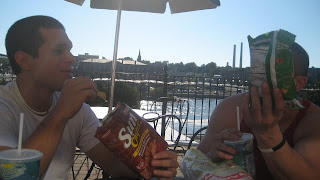 After lunch, off we went again to finish our job. My day finished with me making his bed (probably it will be the last time it will look tidy in the three remaining months!), and saying my good byes after filling up his tank with some gas. I drove back to Kuki and Gary's place for another pleasant night of conversation and a good pecan and peach pie topped with ice cream. I went to bed and fell asleep like a baby...I was soooo tired!!! 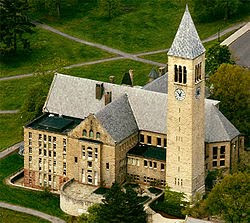 It happens that Eduardo,my son, has won a well deserved scholarship in Cornell University's Johnson  School of business, of which I am sooo proud!!! Since Cornell is in Ithaca, 20 minutes away from Cortland, where Kuki lives, Eduardo asked us to come to the morning mass in Sage Chapel at Cornell.  We had a wonderful healthy breakfast in Kuki's patio, from where we could see the beautiful landscape along the back of her house, and off we headed, the three of us to Cornell. 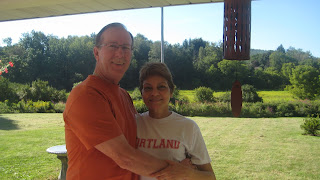 Along the way we enjoyed the beautiful and peaceful views that Ithaca has to offer to its visitors.
Cornell is another world! The main campus is marked by an irregular layout and eclectic architectural styles, including ornate Collegiate Gothic, Victorian, Neoclassical buildings, and less decorative international and modernist structures. The more ornate buildings generally predate World War II .  Cornell was founded in 1865 by Senator Ezra Cornell, who donated his farm in Ithaca and a $50,000 endowment to start this project. His goal was, in his own words: "Coeducation of the sexes and entire freedom from sectarian or political preferences is the only proper and safe way for providing an education that shall meet the wants of the future and carry out the founders [sic] idea of an Institution where "any person can find instruction in any study. I herewith commit this great trust to your care".
From the 209 acres donated by Ezra, Cornell has extended its land to 750 acres, and houses around 20, 000 students. And while admission to Cornell is competitive, Cornell's admissions personnel vigorously support equality of opportunity. What they're looking for beyond the numbers is intellectual potential, strength of character, and love of learning. Cornell houses 7 undergraduate schools and seven graduate schools. 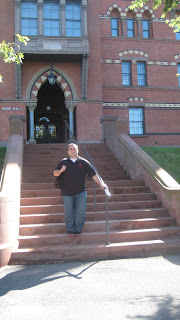 Sage Hall, initially built in 1873, housed the Sage College for Women, institutionalizing coeducation of sexes ( a great innovation in those times) and was financed by businessman Henry Sage, with an endowment of $250,000. It was later renovated between April 1996 and August 1998, at the cost of $38 million, to convert the building into the new home (before it functioned since 1946 in Mc Graw and Mallot Halls) for the Johnson Graduate School of Management, which was named after the grandfather of its great benefactor SC Johnson JR., who donated 20 million dollars to continue with the school's programs. In 1998 the school started the student-managed Cayuga MBA Fund, and the Parker Center for Investment Research was established. Today, the school is one of the six Ivy League business schools in the US. From the 2664 applicants in 2010, only 272 students with a GPA of 3.3 have been able to enroll in the MBA program...61% are men and 39% women; of those, 24% belong to minorities groups, 73% are US citizens and they have worked an average of 5 years before they persued their MBA degree. The average tuition is around 45,000 a year.  And Eduardo, my son, with a full scholarship for his studies, is one of them....How could I not be proud?  You hear me, Eduardo!!!!! I am proud of your big effort, which I personally testified.
The first point of our visit was the most wonderful Chapel I have ever seen in a long time: Sage Hall Chapel. This is a non-denomination chapel on the campus of Cornell University, and serves as the final resting place of the university's founders, Ezra Cornell and Andrew Dickson White, and their wives. Besides the university founders and chapel benefactors, others interred there include University president Edmund Ezra Day and his wife, former New York Governor Alonzo Cornell, philanthropist Jennie McGraw, her father John McGraw and her husband, Willard Fiske. The building was a gift to the university of Henry William Sage and his wife.  Needless to say, I took a lot of beautiful pictures, especially of the Tiffany windows and highly ornamented walls and ceiling. 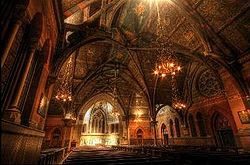 Eduardo took us to tour the University and Sage Hall's facilities, where he goes to classes.The classrooms are acoustic and it called our attention that they have like 4 blackboards one on top of the other.  They must write a lot!!! They all have the most modern equipment. 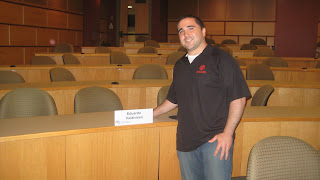 We had a wonderful lunch at the Statler Hotel, home of the The School of Hotel Administration at Cornell University, which is a specialized business school for hospitality management founded in 1922 as the first four-year intercollegiate school devoted to the field.  The Statler Hotel has 153 guest rooms.

Each year over 200 Hotel School students work alongside professionals in a range of hotel and restaurant operations; many do so to supplement their education at the school.
The brunch was out of this world, with a great array of hot dishes, salads, fantastic desserts and wonderful service. 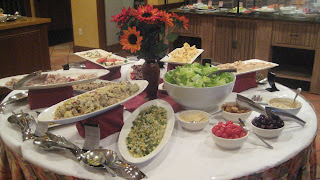 The bad side of this, is that our stomachs felt very bloated and uncomfortable for hours.  That is the price of having "hearty meals"!
What a wonderful day in Cornell: So much history, beautiful landscapes, and lots of nice people...like Eduardo and my nice friends who had the patience to take me there.
As I returned, from my trip I kept thinking that I still had some time to go to Easton, Pennsylvania, my old homestead; which I did, and visited some dear friends. Went past Vivian's house, my dear friend who died two years ago.  She was special because she loved me and believed in me...and that my friends, is something which I will never forget and treasure so much until the end of my days.
Publicadas por Lucy Newton a la/s 03:43 1 comentario: