A Waltz by Sir Anthony Hopkins

The story of the 500 year old frozen girl

Interesting video and information about discovery of Inca children. 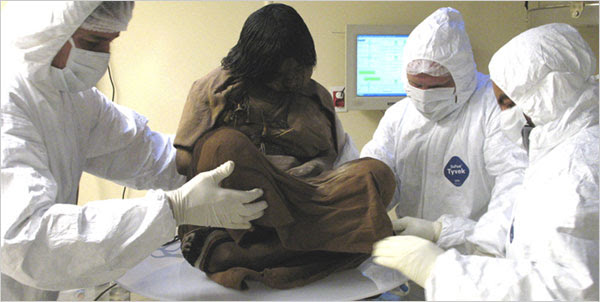 
Children of the Cold

Unearthed in 1999 from the 22,000-foot summit of Mount Llullaillaco, a volcano 300 miles west of here near the Chilean border, their frozen bodies were among the best preserved mummies ever found, with internal organs intact, blood still present in the heart and lungs, and skin and facial features mostly unscathed. No special effort had been made to preserve them. The cold and the dry, thin air did all the work. They froze to death as they slept, and 500 years later still looked like sleeping children, not mummies.

In the eight years since their discovery, the mummies, known here simply as Los Niños or “the children,” have been photographed, X-rayed, CT scanned and biopsied for DNA. The cloth, pottery and figurines buried with them have been meticulously thawed and preserved. But the bodies themselves were kept in freezers and never shown to the public — until last week, when La Doncella, the maiden, a 15-year-old girl, was exhibited for the first time, at the Museum of High Altitude Archaeology, which was created in Salta expressly to display them.

The new and the old are at home in Salta. The museum faces a historic plaza where a mirrored bank reflects a century-old basilica with a sign warning churchgoers not to use the holy water for witchcraft. Now a city of 500,000 and the provincial capital, Salta was part of the Inca empire until the 1500s, when it was invaded by the Spanish conquistadors.

Although the mummies captured headlines when they were found, officials here decided to open the exhibit quietly, without any of the fanfare or celebration that might have been expected.

“These are dead people, Indian people,” said Gabriel E. Miremont, 39, the museum’s designer and director. “It’s not a situation for a party.”

The two other mummies have not yet been shown, but will be put on display within the next six months or so.

The children were sacrificed as part of a religious ritual, known as capacocha. They walked hundreds of miles to and from ceremonies in Cuzco and were then taken to the summit of Llullaillaco (yoo-yeye-YAH-co), given chicha (maize beer), and, once they were asleep, placed in underground niches, where they froze to death. Only beautiful, healthy, physically perfect children were sacrificed, and it was an honor to be chosen. According to Inca beliefs, the children did not die, but joined their ancestors and watched over their villages from the mountaintops like angels.

Discussing why it took eight years to prepare the exhibit, Dr. Miremont smiled and said, “This is South America,” but then went on to explain that there was little precedent for dealing with mummies as well preserved as these, and that it took an enormous amount of research to figure out how to show them yet still make sure they did not deteriorate.

The solution turned out to be a case within a case — an acrylic cylinder inside a box made of triple-paned glass. A computerized climate control system replicates mountaintop conditions inside the case — low oxygen, humidity and pressure, and a temperature of 0 degrees Fahrenheit. In part because Salta is in an earthquake zone, the museum has three backup generators and freezers, in case of power failures or equipment breakdowns, and the provincial governor’s airplane will fly the mummies out in an emergency, Dr. Miremont said.

Asked where they would be taken, he replied, “Anywhere we can plug them in.”

The room holding La Doncella is dimly lighted, and the case itself is dark; visitors must turn on a light to see her.

“This was important for us,” Dr. Miremont said. “If you don’t want to see a dead body, don’t press the button. It’s your decision. You can still see the other parts of the exhibit.”

He designed the lighting partly in hope of avoiding further offense to people who find it disturbing that the children, part of a religious ritual, were taken from the mountaintop shrine.

Whatever the intention, the effect is stunning. Late in August, before the exhibit opened, Dr. Miremont showed visitors La Doncella. At a touch of the button, she seemed to materialize from the darkness, sitting cross-legged in her brown dress and striped sandals, bits of coca leaf still clinging to her upper lip, her long hair woven into many fine braids, a crease in one cheek where it leaned against her shawl as she slept.

The bodies seemed so much like sleeping children that working with them felt “almost more like a kidnapping than archaeological work,” Dr. Miremont said.

One of the children, a 6-year-old girl, had been struck by lightning sometime after she died, resulting in burns on her face, upper body and clothing. She and the boy, who was 7, had slightly elongated skulls, created deliberately by head wrappings — a sign of high social status, possibly even royalty.

Scientists worked with the bodies in a special laboratory where the temperature of the entire lab could be dropped to 0 degrees Fahrenheit, and the mummies were never exposed to higher temperatures for more than 20 minutes at a time, to preventing thawing.

DNA tests revealed that the children were unrelated, and CT scans showed that they were well nourished and had no broken bones or other injuries. La Doncella apparently hadsinusitis, as well as a lung condition called bronchiolitis obliterans, possibly the result of an infection.

“There are two sides,” Dr. Miremont said. “The scientific — we can read the past from the mummies and the objects. The other side says these people came from a culture still alive, and a holy place on the mountain.”

Some regard the exhibit as they would a church, Dr. Miremont said.

The mountains around Salta are home to at least 40 other burial sites from ritual sacrifices, but Dr. Miremont said the native people who live in those regions do not want more bodies taken away.

“We will respect their wishes,” Dr. Miremont said, adding that three mummies were enough. “It is not necessary to break any more graves. We would like to have good relations with the Indian people.”

Etiquetas: World: The Story of the 500 Year Old Frozen Girl.