Yesterday was my birthday. I felt so loved...just stayed all day in, answering the phone to the good wishes from everybody, and trying to read de 60+ messages from my friends in FB. At 2pm I got a big flower bouquet from my grandaughter. I trimmed the ends of the stems and got a nice crystal vase, filled it with water, poured some vitamins inside, and put it on top of the table near the window, to illuminate the cloudy and sad winter afternoon with the colors of a much wanted spring. I like to decorate everything around me, to share beautiful things with people. 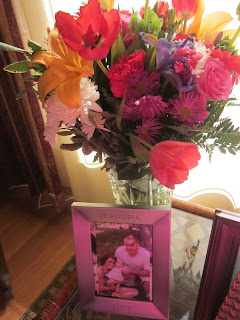 My grandaughter and her mom called around 3pm. She said "Happy Birthday Grandma", with her sweet baby voice and went hopping away. She was pretending to be a bunny. Her mom and I talked for a while and I showed her my new necklaces...I had spent a great part of the night making them. They turned out real pretty. After a while, Mrs. Bunny appeared...she was sitting on the couch playing with a toy and had the biggest smile of mischief on her face. She then went to a back room and said she wanted to take nap . She made my day!
I made a flan for the friends that had invited me to their house and since my husband was working, I headed to the party all by myself, because they called him just before we were going to leave.
I never thought I was going to feel so welcomed by people I had hardly seen.
The friend who introduced them to me at a house warming party I had some months ago, had called me during the week enticing me to go to their house, and although I had been invited by other people in Jersey, I decided to go because my husband had to work around here and if they called him he would be able to reach work without any problem.
Liz and Rick have a very welcoming home and as soon as I entered, they greeted me very warmly. Outside, in the yard, they had a cement pit and a wonderful bonfire was going on. Rick is an expert and was cutting branches from these pine trees which he has collected from the neighbor's curves after Christmas. Needless to say, the smell and crackling of the burning pine needles was wonderful and even though it was very cold outside, the proximity to the fire gave us warmth. I don't know, but there is something mysterious about the sight of the dancing flames. I could observe them for hours! I don't know why I have never lit my fireplace at home... 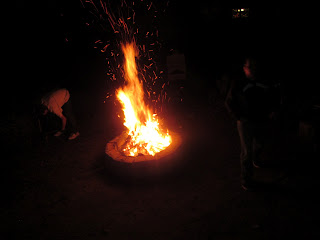 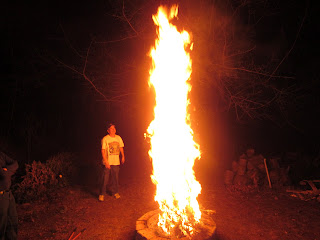 They had drinks and hors de ouvres while Liz was getting dinner ready. This was a special meal. She has learned to make pasta from scratch from her Italian mother and prepared a big batch of parpadelli(ribbons of pasta) and cut it with her special machine. The meat sauce had been simmering for 8 hours with the homemade meatballs and the special bracioli (flank meat seasoned with all these mistery ingredients) a lo italiano was slowly cooking inside, releasing the wonderful aroma of its juices (In cookingwithlucylu.blogspot.com, I have included these recipes). In the other burner, a wonderful combination of hot and sweet sausages and peppers and onions, was almost ready to be served. Mickey, one of our friends, was tossing the salad...Susy was pouring some of the parmesan cheese in a small bowl...Jimmy was cutting the bread in slices... Rick was setting the long table. I felt like if I was in a home in Tuscany or Calabria, where the papa presides the table and the guests sit at the sides, while the mama brings the ample and beautifully decorated ceramic dishes overflowing with all kinds of wonderful Italian food.
So Liz started the pasta ceremony and announced to us that the big pot of water was boiling and ready to cook the pasta. Two minutes, she said, and it will be ready...al dente, like the Italians like it...not too soft, so that your teeth feel like they are munching something... 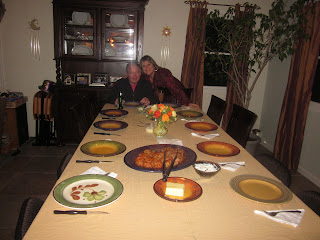 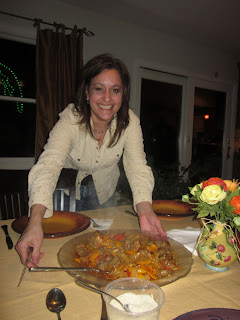 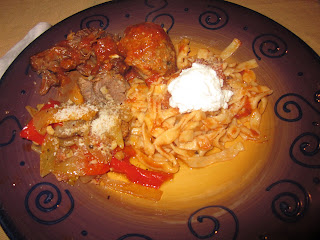 Somebody made some mimosas (champagne and orange juice with a drizzle of cranberry liquor), and everybody made a toast in my honor. The red wine bottles could not be absent at this special meal, and everybody also had their cups ready to accompany the dinner. Needless to say, it was delicious and we souped our crunchy slices of bread in the smooth juices of the tomato and meat sauce, while we laughed while Jimmy, the best story letter I have met, told us innumerable anecdotes.
After dinner, we went outside to observe the bonfire, while Liz made us heaping cups of wonderful coffee.

After a while, they called us in and they surprised me with a cake with my name on it and they sang Happy Birthday. 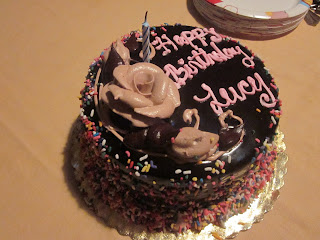 I was so happy...no birthday without blowing candles while every body sings to you good wishes, is complete. 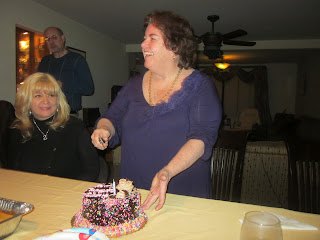 Just so that you know:
The tradition of placing candles on birthday cake is attributed to early Greeks, who used to place lit candles on cakes to make them glow like the moon. Greeks used to take the cake to the temple of Artemis. Some say that candles were placed on the cake because people believed that the smoke of the candle carried their prayers to gods. Others believe that the custom originated in Germany where people used to place a large candle in the centre of the cake to symbolize ‘the light of life’.
In present times too, people place candles on birthday cakes and a silent wish is made before blowing out the candle. It is believed that blowing out all candles in one breath means the wish will come true and the person will enjoy good luck in the coming year. Some also smear out the name of the person before slicing of the cake to bring good luck. The sharing of a birthday cake represents sharing of joy and togetherness. As a courtesy, it reflects one's hospitality and respect for guests. What a wonderful tradition! And Susy was the instigator when she brought this gift for me!
At the table Liz put a dish full of canolis (sicilian pastry desserts,which are tube-shaped shells of fried pastry dough, filled with a sweet, creamy filling usually containing ricotta), and a plate of the wonderful Linzer cookies (the recipe comes from the city of Liz in Austria, which is famous for the confection of fine pastry) dusted with powdered sugar. 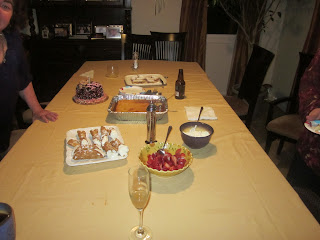 After some more stories and warm conversation, it was time to go. A wonderful evening, lots of love and a heart warming like I have never felt in years. Wish my husband had enjoyed this day with me. I have no words to thank my hostesses for this incredible night of my birthday! The pictures and video say it all!,
Publicadas por Lucy Newton a la/s 14:25 1 comentario: