From Wikipedia:
Animusic is an American company specializing in the 3D visualization of MIDI-based music. Founded by Wayne Lytle, it is incorporated in New York and has offices in Texas and California. The initial name of the company was Visual Music, changed to Animusic in 1995.
The company is known for its Animusic compilations of computer-generated animations, based on MIDI events processed to simultaneously drive the music and on-screen action, leading to and corresponding to every sound.
Unlike many other music visualizations, the music drives the animation. While other productions might animate figures or characters to the music, the animated models in Animusic are created first, and are then programmed to follow what the music "tells them" to. 'Solo cams' featured on the Animusic DVD shows how each instrument actually plays through a piece of music from beginning to end.
Many of the instruments appear to be robotic or play themselves using curious methods to produce and visualize the original compositions. The animations typically feature dramatically-lit rooms or landscapes.
The music of Animusic is principally pop-rock based, consisting of straightforward sequences of triggered samples and digital patches mostly played "dry"; i.e., with few effects. There are no lyrics or voices, save for the occasional chorus synthesizer. According to the director's comments on Animusic 2, most instrument sounds are generated with software synthesizers on a music workstation (see Software Programs for more info). Many sounds resemble stock patches available on digital keyboards, subjected to some manipulation, such as pitch or playback speed, to enhance the appeal of their timbre.


MIDI (/ˈmɪdi/; short for Musical Instrument Digital Interface) is a technical standard that describes a protocol, digital interface and connectors and allows a wide variety of electronic musical instruments, computers and other related devices to connect and communicate with one another.[1] A single MIDI link can carry up to sixteen channels of information, each of which can be routed to a separate device. 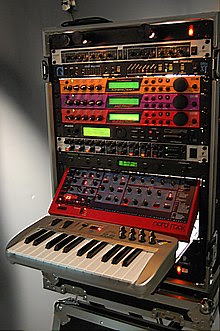 MIDI allows multiple instruments to be played from a single controller, which makes stage setups much more portable. This system fits into a single rack case, but prior to the advent of MIDI would have required four separate keyboard instruments, plus outboard mixing and effects.
Publicadas por Lucy Newton a la/s 13:39 No hay comentarios.: